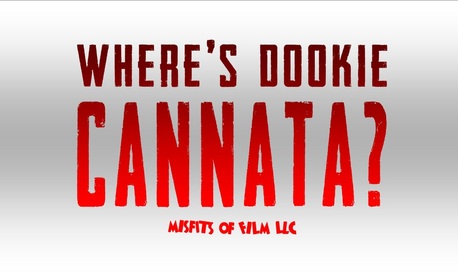 Where's Dookie Cannata? contains may examples of symbolism and tributes to other movies.

Ruby Soho wears a white beret in the beginning of the movie.  This is a tribute to classic film The Postman Always’ Rings Twice starring Lana Turner and John Garfield.  Turner’s character wears a similar beret.  In Where’s Dookie Cannata? Ruby wears this beret and it is knocked off her head a couple of times yet she wears it again.  This occurs until the scene where Ruby enters the bar.  The bar tender knocks her over and the beret comes off and she no longer puts it back on.   This symbolizes Ruby’s changing from the innocent naive “trophy wife” into someone who is out to get what she wants.

Agent Fuller’s diagrams clues on his wall and the resulting diagram foreshadows his future.  The figure resembles a hobo sign.  During the depression hobos hopping trains from town to town used chalk  symbols drawn on walls and fences to communicate with other hobos.  This particular symbol means don’t go this way or don’t go there.

Delores Cannata is the ex-stripper housewife with the heart of gold.  She takes great care in her appearance and is seen throughout the movie wearing several outfits.  In the scene where she is interrogated by Agent Fuller she is wearing a white dress.   This symbolizes the purity of her love for her husband which provides her strength against the agent’s mistreatment of her.